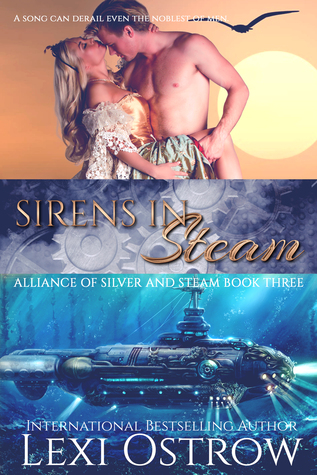 McKenna Caffry learned about demons when they attacked her carriage a little over one year prior. Now she’s finished her training and is ready to prove her worth to the people that changed her world. She’s not thrilled with her first mission – watch over the Royal on a mission to rescue captured Alliance member, Kellan. Being a nanny was not what she joined the Alliance for and none of the others on the mission had been given such a lowly task. It doesn’t help that his smile sends waves of lust through her every single time.

Jacob Tresay III is one of many bastard sons of the King. As a distant Royal living in court he is exposed to the knowledge that demons run amuck in the London Underground, and all over the world. When his father demands that a Royal be present on a rescue mission he volunteers for the job to get out of court. The open seas awaited him, if he could only shake his personal Alliance assigned guard, even if McKenna set his body on fire.

Finding one of few open entrances to hell will take them to the middle of the sea. But what awaits them when they find the entrance is the most dangerous thing a sailor can encounter, Sirens. McKenna and Jacob must see what passion lies between them if they are going to make it past the sea demons and rescue Kellan. And themselves

Add it your goodreads

“I can protect myself from anything, including Lucius. We have been taught mental barriers.” her voice was soft, her lips barely moved as she spoke.

“Then let’s test it out McKenna, let me test you.”

Whether he meant to taste her or to see if she would be able to stop him he wasn’t certain. His head tipped to the side as his other hand rose to her chin and titled her head to the side. Slowly, his lips touched hers. There was no giant punch of lust that accompanied the kiss, but he did like how soft her lips were under his.

Lexi Ostrow has been in love with the written word since second grade when her librarian started a writing club. Born in sunny southern California she’s spent time in various places across the country and can’t wait to settle down somewhere in the French Quarter when she’s able too.

Lexi has been a writer ever since the second grade in some form or another. Getting her degree in creative writing and her master’s in journalism she couldn’t wait to get a chance to put her fantasies down on paper. From paranormal romance to thriller there isn’t a genre she doesn’t love to spend her time reading or writing.

Reading and writing are her first loves but her passion for shopping, love for yummy food and her love for all her many pets. She hopes to one day help other readers fall in love with writing as she did.
~