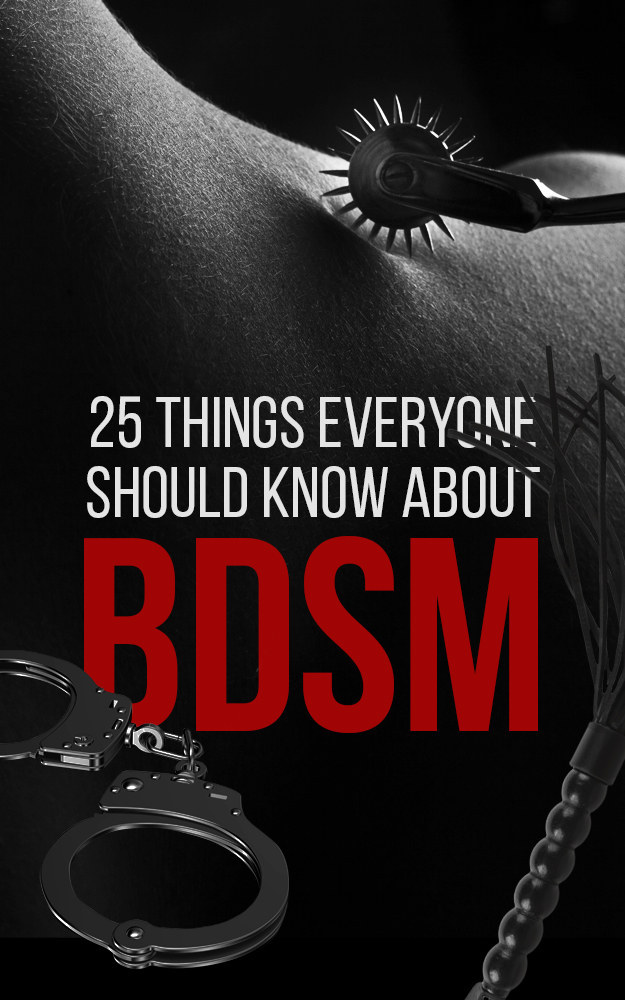 2. It doesn’t always involve sex, but it can.

3. There is nothing inherently wrong or damaged with people if they’re into it.

4. Know that you can always say no.

“A lot of people starting out think it’s ‘all or nothing,’ especially if you’ve only been with one partner,” says Thorn. For instance, you might think that because you enjoyed being submissive under certain circumstances, that means you must agree to a whole host of submissive or masochistic behaviors that you’re not necessarily into.

5. BDSMers are just as stable as people who prefer vanilla sex.

7. It’s not all whips and chains all the time — or ever, if that’s not your thing.

9. There are dominants, submissives, tops, and bottoms.

So you’ve probably heard about dominants and submissives (if not, the dominant enjoys being in charge, while the submissive enjoys receiving orders). But BDSMers may also use the terms “tops” and “bottoms” to describe themselves. A top could refer to a dominant or a sadist (someone who enjoys inflicting pain), while a bottom could refer to a submissive or a masochist (someone who enjoys receiving pain). This allows you to have a blanket term for those who generally like being on either the giving or receiving end in a BDSM encounter. And there’s no rule that says you can’t be both dominant and submissive in different circumstances or with different partners.

10. It can be as simple or as technical as you want.

11. Before you go past the VERY basics, do your research.

Using a blindfold or an ice cube or fuzzy handcuffs you got at a bachelorette party are all relatively harmless beginner behaviors if you’re into them. But before you play around with some of the trickier tools, you need to learn how to do so safely. Even a rope or a whip can be dangerous if you don’t know what you’re doing.

While there’s no one required reading list, there seem to be a few favorites that are often recommended to beginners, like SM 101 by Jay Wiseman, Screw the Roses, Send Me the Thorns, by Phillip Miller and Molly Devon, and The New Topping Bookand The New Bottoming Book by Janet Hardy and Dossie Easton. [Editor’s note: Have others you’d suggest? Please add them in the comments!]

Classes, conferences, and meet-ups are also helpful for learning specific techniques, says Thorn. Another popular resource is FetLife.com, a Facebook-like network for the kink community, which can connect you with message boards, groups, and classes in your area.

13. It’s important to get your information from a variety of sources.

“When you can’t talk about what’s happening and you can’t make sense of your experience with like-minded people, that’s way more dangerous than the variety of activities you might fantasize about,” says Thorn.

14. Safe words are definitely a thing.

It might sound cheesy, but it’s a well-established norm in BDSM. (And hey, your safe word could actually be “cheesy” if you want. You do you.) “Safe words are probably one of the most important norms that have spread across the community, even if people use them in different ways,” says Thorn. For instance, not everyone uses safe words all the time after a while, but it’s important to start out with them. They can essentially be anything you want, as long as it’s something that you wouldn’t normally say during sex. You can find more info about safe words here.

15. And at some public events, there are even safety monitors on duty.

“Dungeon monitors will kick out people who don’t look like they’re playing safely,” says Brame. This can be anything from ignoring safe words to using a whip incorrectly. Seriously, did we mention that safety is paramount here? In fact, the acronym SSC (safe, sane, consensual) is one of the most common pillars of the practice.

Getting swept up in the moment and accidentally stumbling into a millionaire’s red room (where you’ll have multiple orgasms) is probably not going to happen to you ever. But, that’s not necessarily a bad thing. “The sexual fantasy makes everything look so easy,” says Brame. “People who actually do this stuff are very cautious about it. It has to be the right place and right time and right equipment. And you have to know you can get the person out [of whatever bondage] if there’s an emergency. You have to feel you can trust the person.” So there’s a lot that goes into one scene, but that doesn’t mean it’s any less satisfying for those who enjoy it.

17. There’s also probably way more talking involved than there is with (most) vanilla sex.

18. There’s actually a pre-negotiation period, where the partners discuss what they like, what they don’t like, and what they absolutely will not tolerate.

Think of this as the primer before the scene. “It’s a way of discussing the experience ahead of time that can increase emotional security,” says Thorn. This can involve anything from scripts and checklists to a more informal discussion of what each person’s expectations are for the scene, what they want and don’t want, and any words or actions that are completely off-limits.

19. And then comes aftercare, the debriefing period that happens once the scene ends.

20. BDSMers can be monogamous, polyamorous, or whatever the hell they want.

21. There are so many different types of whips.

This is not a one-size-fits-all kink. There are light floggers, leather whips, whips with single tails, whips with multiple tails that are flat and wide, the list goes on, says Thorn. But because certain types can be harsher than others, you really need to learn how to use them properly (again, workshops are crucial). “People practicing with a single-tail whip will often start with a pillow or some distant small object, like a light switch,” she says.

22. And there are some places that you definitely don’t want to whip.

Like, um, the eyes, obviously. Or the kidney area. “The skin is thin there and you have vital organs under there. You can bruise your kidneys,” explains Brame.

23. If you want to bring it up in your current relationship, absolutely do it.

“There are plenty of stories out there of people who were too nervous to bring it up and then found out that their partner had the same fantasy,” says Thorn. If you’re nervous about it, ask if they’d be interested in checking out a particular book or workshop you heard about. Or just talk about it in the context of sexual fantasies by asking your partner if they’ve ever tried anything like BDSM or if they’ve ever wanted to. If you think about it, you’re only risking one awkward conversation, and the payoff can be huge if this is something you want in your life.

24. There is an immensely helpful list of kink-aware professionals so you can find a doctor or therapist who uniquely understands your lifestyle.

Maybe you’re worried that your gynecologist or your lawyer won’t be sensitive to your lifestyle or doesn’t allow you to feel comfortable talking about it. Check out theKink Aware Professionals Directory from the National Coalition for Sexual Freedom to find someone who will be more accepting.