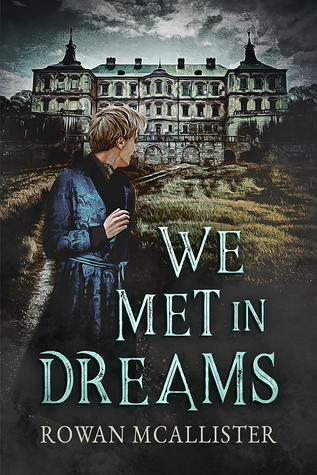 In Victorian London, during a prolonged and pernicious fog, fantasy and reality are about to collide—at least in one man’s troubled mind.

A childhood fever left Arthur Middleton, Viscount Campden, seeing and hearing things no one else does, afraid of the world outside, and unable to function as a true peer of the realm. To protect him from himself—and to protect others from him—he spends his days heavily medicated and locked in his rooms, and his nights in darkness and solitude, tormented by visions, until a stranger appears.

This apparition is different. Fox says he’s a thief and not an entirely good sort of man, yet he returns night after night to ease Arthur’s loneliness without asking for anything in return. Fox might be the key that sets Arthur free, or he might deliver the final blow to Arthur’s tenuous grasp on sanity. Either way, real or imaginary, Arthur needs him too much to care.

Fox is only one of the many secrets and specters haunting Campden House, and Arthur will have to face them all in order to live the life of his dreams.

I knew I was a fan of Rowan’s work when I read the ‘Greatest Hits’ compilation and gave two out of the three stories 5 stars. Back then, they were a new-to-me author and I’ve been unfortunate in not having enough time to further explore their work until now. Thankfully, this one came along and reminded me of just why I loved their work so much the first time around.

This is one of my new auto-buy, must-have-in-paperback authors.

What can I say about this one? It blew my mind.

Right from page one, the story grabbed me and didn’t let go even after the end. Now, I’m not a fan of 1st person; it’s just me and a quirk I have, because usually so much information is left out because it’s expected that we already know it or it’s not as easy to insert naturally. I never have that problem with Rowan’s writing. The 1st person provided here, for Arthur’s POV, was absolutely vital to the telling of the story as well as the information it needed to provide the reader. And it was captivating. I never once thought about it being 1st person; I was too sucked in to do anything by start the journey and see where it led.

For me, Arthur was not only the MC of the story but he was the star of the show. Not once did he never let me down, get on my nerves or have an annoying switch of personality, like some books I’ve read recently, but he was loveable and relatable. He was consistent, pleasant to read, disturbed to the perfect degree and fully accepting of his shortcomings. I felt for him every step of the way, for the battles he faced, for not being listened to or understood. I could see why Fox had become this bright spark in his life that he didn’t want to lose.

Fox himself was amazing. Intriguing, mysterious and full of that charm and charisma that Arthur had never really been around before. He was precisely what Arthur needed. I love how he played along and let Arthur believe he wasn’t real because it soothed him and made him feel more comfortable. Opening up to Fox was just the beginning of Arthur’s journey, but it wouldn’t have been possible without Fox’s understanding and the way he listened without judgment, even when things seemed impossible. He pushed Arthur’s boundaries, but didn’t hesitate to stop or apologise if he thought he’d made his condition worse or frightened him.

I really loved the side characters. ALL of them. I found Tom intriguing and mysterious, and I couldn’t tell if he was afraid of Arthur or just a little too overprotective of him from a distance. Pendel was an absolute joy. Though he started out as the stuffy servant who was always attentive and loyal, but still aloof, there were cleverly written bright moments when he appreciated Arthur’s gratitude or showed concern openly. They made me love him so much. I never once doubted him or his motives, because it was clear that as well as being attentive, he loved Arthur like a son. As did Uncle Oscar, who was great. I was scared that he was a flip-flopper for a while, that he just did what the doctor told him because he didn’t have the first clue how to treat Arthur or how to properly take care of him. I was scared that he wasn’t cut out for taking care of him in the way that was needed and that Arthur needed him to. But he redeemed himself so many times that the doubts didn’t linger. And, I’ll admit, I said a little “Hallelujah!” for Uncle Oscar and Dr. Stuart when the latter made his first appearance. What they did for Arthur was just fantastic.

The way Arthur grew from a meek, ill young man so sure that he would spend his life that way to becoming brave and challenging the status quo made me feel so proud. It was so naturally done, so well explored with set backs and achievements, little things that he found victory in, that I shared every joy and every loss with him.

Now, in the nature of total transparency, I have to confess…I cried. Probably not a surprise, but I did. Twice. The first was when Arthur found out the truth about the ghostly woman in white and the second time was when he first spoke to her. And…okay, a third time…that park bench moment totally got me in the feels. Hard. With a sledgehammer. And, yeah I’ll admit that I held my breath enough times to make me dizzy. But that’s the genius of the writing and I will never complain about that.

Overall, the writing was first class. The plot growth was spellbinding and intriguing, never leaving me wondering too long. The world building and historical accuracy for the time period was perfect. Utterly perfect. I normally wax lyrical about the writing and the editing and plot, but I don’t need to. This story speaks for itself. “We Met in Dreams” is the best historical fiction I’ve ever read in this genre so far. One day McAllister might write another to knock it off the top spot, but until then, this one takes the crowning glory.

From the feels, the way I repeated quivered and quaked with apprehension, held my breath in fear or surprise, to the sizzling hot chemistry that built slowly, to the absolutely stunning exploration of mental health, suicide, death and memory issues of the time, there was nothing I didn’t love. In fact, I couldn’t have loved it more. If I could have given it a hundred stars I would have.

I nearly broke down when Arthur met Dorian and, for a situation at 88% of the story, it’s proof that this story didn’t fail to keep captivated right until the last word. And I still wanted more.

This was perfection from beginning to end.

I actually marked eleven favourite quotes, but I’m only going to share my top 3 here.

““What do you want from me, Arthur?”
“I don’t want you to go.”
“But what do you want?”
“I want you to be here always, to never leave me.”
He gripped my neck and leaned his forehead to mine. “I can’t give you that. You know I can’t. Not here. Not like this,” he whispered into the barest few inches between us, the wine on his breath as intoxicating as what I’d drunk. “Is that all you want from me, my presence and my company? Tell the truth.”
“No,” I admitted. “But it isn’t right to feel this way…is it?”
With him standing so close and his hand on my neck, I wasn’t so certain of the answer anymore.”

“So many nights I spent curled beneath these blankets, cold and alone, or in a nest in front of the fire so I would not have to face the empty space beside me on the mattress. I’ve been so lonely, Fox, you cannot even imagine the depths of it. I was cold to the bones of me, even at the height of summer, longing for something I thought I would and could never have. Hating myself for the feeling.”