I was introduced to the Black Butler manga long before I ever read any of it. I heard people talking about it constantly and the relationship between Ciel and Sebastian, master and servant. Then I managed to get my hands on a paperback of Volume 1 and I fell instantly in love. There’s a lot of controversy about whether Ciel and Sebastian were meant to be a couple and weren’t allowed by the editors/publishers, or whether that rumour is nothing more than gossip. Either way, I love how the two interact with each other and the chemistry they have. 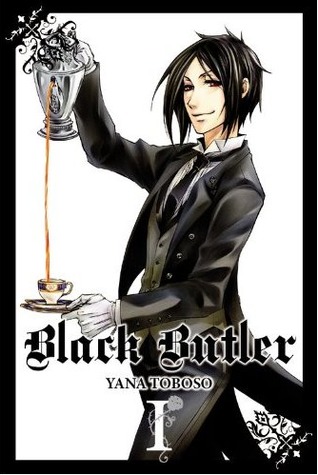 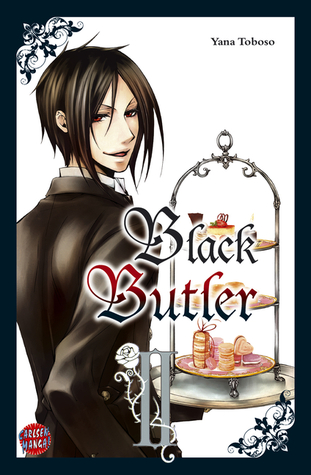 In the Victorian ages of London The Earl of the Phantomhive house, Ciel Phantomhive, needs to get his revenge on those who had humiliated him and destroyed what he loved. Not being able to do it alone he sells his soul to a demon he names Sebastian Michaelis. Now working as his butler, Sebastian must help the Earl Phantomhive in this suspenseful, exciting, thriller manga.

She has also written yaoi under the pen name Yanao Rock (簗緒ろく).

Appearance
Yana Toboso draws herself as a devil with a black body and horns, a white head, and a pointed tail. She has never uploaded a picture of herself, so her actual appearance is unknown.

The illustrations were gorgeous and really well detailed, though the in-between sketches were less detailed. The story was really well plotted, with excellent world building, good pacing, and a slow, gradual reveal of the secrets. Sometimes the text was confusing to follow, with so many extra notes and small text jottings in between the panels. I love how it builds up the butler duties, slowly going from the expected to the extraordinary. And the relationship between Ciel and Sebastian is beautiful, especially after the ring incident.
I can’t wait to read more.

This was a really good progression from the previous plot, still the same atmosphere and troubles with the staff, which kicked off the story, then progressing into a much darker storyline. There was still the same quality and skill of illustrations. I found the plot and action scenes easier to follow this time around, and I loved the intriguing twist on the Jack the Ripper story.

Everything I wanted and expected from Vol. 3, finishing up the Jack the Ripper plot. Lots of action, lots of creepy scenes for Sebastian and the Grim Reaper, and a revisit by the Undertaker!

Intrigued to find out what those last few pages will lead to.